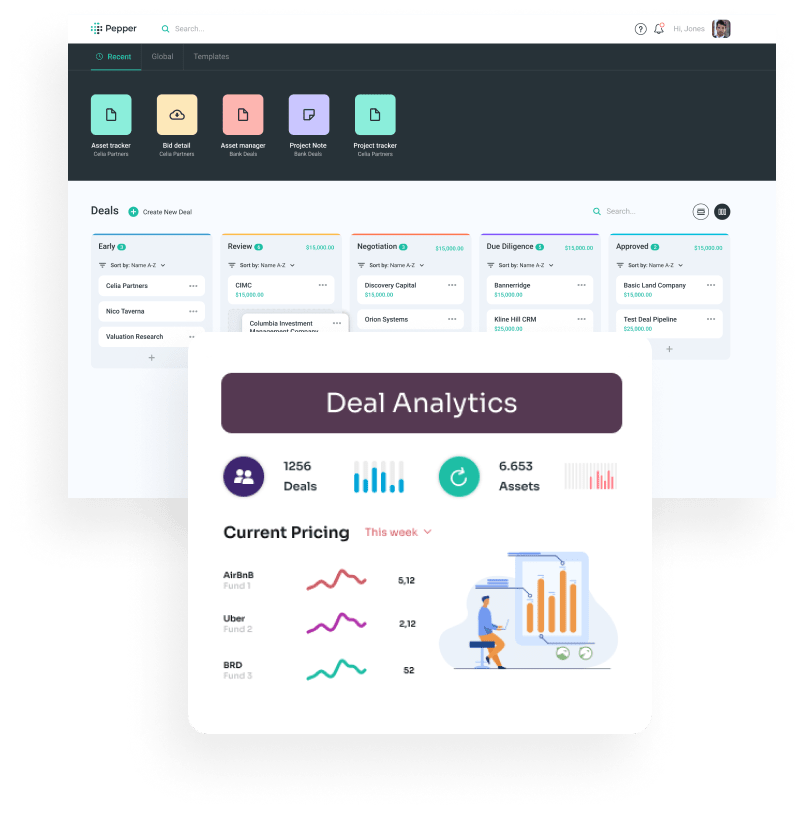 Pulak Sinha , Ann Eberle Thomas, and Jaskaran Singh arrived at the same spot, but from very different places.  Co-Founder and CEO of Pepper, Sinha grew up in India and studied Engineering before coming to the United States at the behest of a friend to help expand their company in the North American Market.  Eberle Thomas, an attorney by training, was raised in the Midwest before coming out East to spend much of her career in big Financial Services on the Legal and Taxation side. Singh also hails from India. He took the route of learning to build, architect and optimize enterprise architecture and embraced Native Cloud, when few thought it was an alternative to on-premise systems.  Though Sinha and Eberle Thomas worked at the same company for years, they met formally on LinkedIn and made common cause immediately.  Singh and Sinha met via a common friend.

After Sinha moved to the United States, he got a Master’s at Columbia and worked in large Financial Services institutions, Hedge Funds, and the like.  He got to understand their operational challenges but also the difficulties they face in expediently allocating capital. Eberle Thomas too faced operational challenges and saw that the lack of controls on capital allocation could lead to epoch-making meltdowns, as we witnessed in the 2008 timeframe.  For Singh, he knew that just as technology can accelerate “bust” it can also accelerate “boom”; further, he knew that for customers that deal with billions of dollars, that security, reliability, uptime, and integration were key.  There was no room for just good-enough.

Building products and connecting with other brilliant technologists came naturally to Sinha, but his superpower is his thorough knowledge of the Secondaries business.  As such, with the help and guidance of CTO Singh, he created Pepper, a cloud-based data platform for Investment and Asset Management, with a focus on Secondaries.   He and Eberle Thomas are now working to bring it to more customers and to help the world understand the importance of “AssetTech” while Singh assiduously works to innovate on the platform, add new modules, and learn from customers.

“We want to be the Middle Office in the Cloud for Secondaries,” they say in unison.  Managing capital, allocating it, dealing with regulation, ingesting and utilizing data—all of these are complex and error-prone activities.  Pepper bridges the gap between Front Office work in Secondaries and ROI and Risk Management as the outcomes.

“80% of firms when polled suggest that they are hamstrung by inefficiencies in the Middle Office,” says Eberle Thomas.  “This is not about the blame game between functions,” adds Sinha, “instead it is about the creation of an effective platform with connected modules that allow for one-source of the truth and one-source of ROI.”

While the company is in early stages commercially, it is growing at a rapid pace.  “Dollars on the Platform” grew to $7 Billion in March, 2022 and is increasing 20% Month-over-Month.  So far, each and every customer is highly satisfied, state the Founders proudly.

This is a heady time in FinTech.  AssetTech as a growth area within FinTech is coming to the fore.  With $120 trillion AUM world-wide, both AssetTech and Pepper couldn’t have arrived faster.

Along with other digital communities, data communities play a crucial role in bringing down barriers by providing use cases, datasets, and professional opinions from data experts all in one place. Find useful data and learn how to use the data you have. Whether you are a data leader, involved in data analytics, or a decision-maker needing to show growth, the DataHunters community is here to help you power your decision-making with the right data.

The Data Hunters Content Team creates content for the data community. Data Hunters is an online community for data seekers, analysts, scientists and business professionals and your “go to” in the Data World.
0  Likes 0 Comments

The Data on Spend Management

Brought to you by TechCrunch – Mary Ann Azevedo